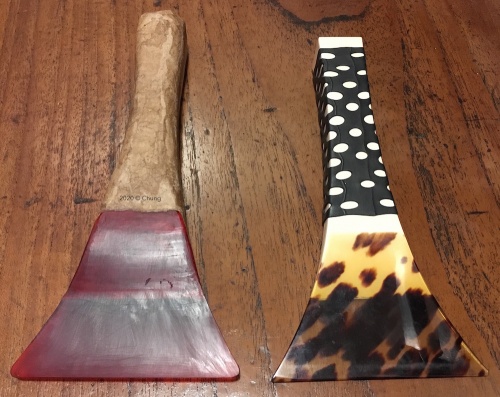 When you think you have limited resource for woodworking, and don’t have any old bachi to recycle… I now present to you an alternative method to make a bachi – Paper mache!! That is, by creating 3D objects by gluing many layers of paper.

I have actually done some giant paper mache project before… made a djembe shell this way… though it didn’t really become a working djembe.

It has been much work, I don’t think I will do this again.

The handle is made of a brass rod, wrapping paper, and wood glue. The tip is made of a scrap pieces thrown out of an auto shop, so I honestly have no idea what it is. But it behaves very similar to the material I previously used, cellulose acetate. 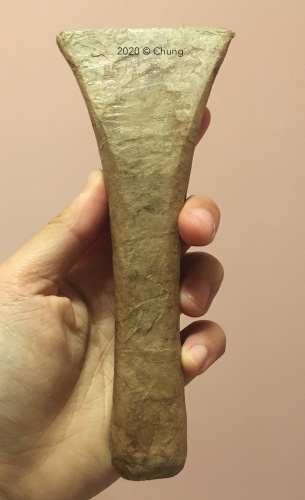 With paper mache, you can’t use sand papers, files or planes effectively. So for obtaining the handle shape, it was done purely by hand with razor blades. The strength of the handle depends on the metal, which extends at least half way underneath the tip piece.

You might wonder, how is the plastic piece glued to the paper mache handle? Turns out, it is impossible to obtain the desired shape without shaving. Therefore, rather than gluing a layer of paper, the gluing surface is compiled by many many layers of paper that are interwoven with each other. This makes gluing both pieces possible. I used super glue.

This is actually the second handle I made. The first one did not work because the metal rod didn’t extend long enough, and the paper I used was very thin and soft. So in the end, even when it has dried, it was somewhat soft. I didn’t believe it would endure the striking force. The brown wrapper papers I used this time are in fact sourced from my packages. They are thicker than printing papers; I didn’t think it would be good in absorbing the glue, but I was wrong. I do mix the wood glue with water, and these papers absorb the diluted mix just fine. The handle ended up slightly too long, I am not sure if I want to saw it down because it would be a mess and I might have to saw through the brass rod (which wouldn’t be that bad).

Well, the shape isn’t so angular yet. It is quite difficult to get straight edge from paper mache, as layering makes the edge round. I am not sure it is necessary to obtain a rectangular shape at this point, if it works. If you want to aim for an angular aesthetic, start with a square-ish rod. It does slip a bit, but most other bachi slip as well. I will try it with an inner tube piece later.

So it’s fun to paper mache the handle, because I could still make it thicker or thinner anytime I want. When its shape is finalized, I should put a layer of lacquer on it to keep out the humidity.

Since I have made the tips before, the task wasn’t new. I did experiment with using a block plane and a sharpened scraper, which have produced a better result than my previous ones. The challenge is to shave down as flat as possible, which is difficult when shaving free hand with a narrow razor blade. The finishing stage was done by a 3″ sharpened scraper, which helped so much in keeping the surface from curving along the edge.

You can see that I have shaved the tip down a lot, but still not as much as the bekkou bachi I have. Considering them different materials, the plastic is actually softer than the bekkou in this thickness. After playing, I found this thickness a workable balance. I also tried when it was slightly thicker, which didn’t snap.

Also, I suggested to use fire to heat the plastic for bending before. Since I didn’t have any alcohol lamp with me, I found soaking the plastic in boiling water working as well. It is less controllable than heating a specific area (i.e. where the bending happen), but way safer. 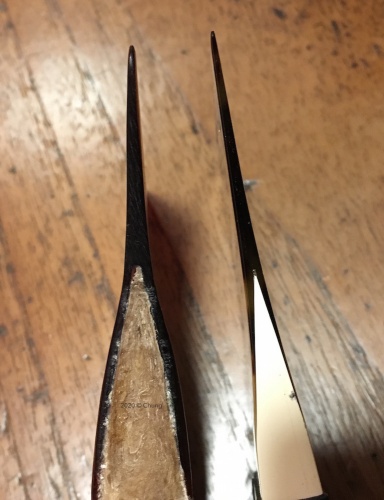 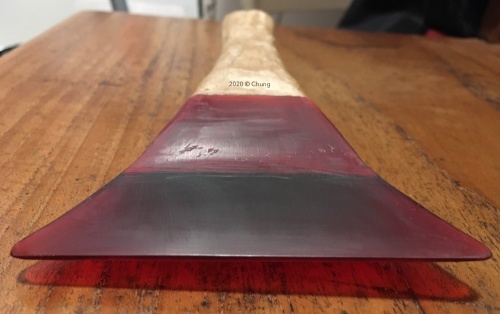